Worldwide, 360 million tonnes of plastic are produced every year: 40% is consumed by the food packaging sector and 3.5% by agriculture.  Just over 30% of plastic waste generated in the EU is recycled, the rest is incinerated, landfilled or released into the environment creating environmental and health problems and a significant economic burden for society.

More than half of the used food packaging collected at municipal waste centres cannot be recycled with currently available techniques due to its heterogeneity and the presence of leftover products. Clearly, the industry needs to set up different systems to close the plastic material loop.

To address this challenge, RECOVER and its 17 multidisciplinary partners are researching to provide novel biotechnological solutions using the combined action of enzymes and organisms (micro-organisms, earthworms and insects) for the remediation of plastic pollution in agricultural fields and the conversion of non-recyclable agri-food plastic waste into biofertilisers and biodegradable plastics for agricultural and food packaging applications.

The insects and earthworms, with the micro-organisms in their digestive system and the enzymes they produce, work together and transform a large part of these plastics into components from which chitin, an ingredient for making biodegradable plastics, is extracted. Precisely the most innovative aspect of this project is the combined action of all the elements.

The aim is to convert plastic waste into biofertilisers and bioplastics for agricultural and food packaging applications.

Another strategy within the same process is to generate biofertilisers from the excrements of insects and earthworms and the bedding used for their development at the expense of plastics. The same organisms will also be used to remove pollutants in agricultural fertiliser that end up in the soil.

Definition of types of plastics and selection of organisms and enzymes

Since the project started in June 2020, the consortium’s activity has focused on identifying the main plastics present in agri-food plastic waste. These include those corresponding to food packaging, which end up forming part of solid urban waste, as well as those used in agriculture, such as trays, pots or mulch films that are either collected or remain on the ground. In general, the project seeks to develop biotechnological solutions for the degradation of the four most representative plastics of fossil origin: polystyrene (PS), low-density polyethylene (LDPE), linear low-density polyethylene (LLDE) and polyethylene terephthalate (PET). These polymers, both primary (virgin) and secondary (recycled), are used for the development of the project.

For the treatment of plastic waste, candidate organisms/enzymes and the basic conditions necessary to degrade or transform them have been selected. Four microbial combinations (consortia) have shown a promising ability to utilise the full range of plastic polymers as a carbon source, especially for linear low density polyethylene (LLDE) and low density polyethylene (LDPE). Two new enzymes have exhibited high activity and (thermo-) stability against LLDPE and other LLDPE and PS degrading counterparts have been synthesised. Additionally, earthworms Eisenia foetida and Lumbricus terrestres, intended for soil bioremediation and vermicomposting scenarios, have been selected to survive in the presence of plastics exhibiting high enzyme degrading activity. In addition, the insects Tenebrio molitor, Ephestia kuehniella and Galleria mellonella, as well as Acheta domesticus and Hermetia illucens have been tested, but the latter two were not effective in degrading plastics. For each worm and insect, compatible micro-organisms have been identified to enhance their activity.

On the other hand, laboratory-scale production of microbial formulations and combinations of insects/worms with microorganisms is being carried out to determine the best conditions for the degradation/conversion of plastics and the scale-up of their production. These conditions are being applied in field trials, composting reactors and insect cultures to validate the new process at pilot scale, as well as for further validation of the by-products of the process in high value-added applications for different end-uses in food and agriculture.

New microbial consortia and enzymes with activity on a wide range of plastic polymers, as well as earthworms and insects capable of digesting plastics on a complex organic matrix are essential to work towards achieving degradation/conversion of heterogeneous mixed plastics with organic debris and removal of plastics from soil. Further integration of biocatalytic systems (hydrolytic enzymes, microbes, insects and earthworms) is expected to maximise transformation yields, be more flexible, allowing the treatment of mixed plastic waste streams, and enable the conversion of fossil plastics into biodegradable counterparts in a single step.

Value-added products to be developed include the valorisation of chitin/chitosan extracted from insects as an additive in active plastic for packaging films and mulch that will provide antimicrobial properties. In addition, biofertilisers such as vermicompost and insect manure will be produced.

The RECOVER project will have a very positive environmental impact. It is expected to offer huge benefits by decreasing the generation and dispersal of plastics in the changes and reducing the large amount of plastic that is currently buried in landfills or incinerated with the implications this has for GHG release.

Cities will become more sustainable and safer through the reduction of plastic waste. A higher percentage of recycled and biodegraded plastic will result in less plastic reaching the oceans and rivers. In addition, agricultural land will be preserved by preventing pollution. New recycling initiatives will increase plastic recycling in the EU by 12%, creating new jobs. In addition, around 80% of CO2 emissions caused by the common incineration of plastics will be avoided.

The overall objective of RECOVER is to provide novel biotechnological solutions to the challenges of recycling and contamination of agri-food plastic waste by converting it into bio-based products and removing it from the soil.

The RECOVER project will make a valuable contribution by offering solutions to the main problems posed by agri-food plastic waste, as well as establishing a new cross-cutting interconnection in the bioeconomy involving waste management and biotechnology.

The RECOVER project is a research and innovation action that started on 1 June 2020 and has a duration of four years. It brings together 17 multidisciplinary partners to develop a set of biotechnology-based processes involving the combined action of novel enzymes, microbial communities, insects and earthworms for the sustainable recycling of food packaging and agricultural plastic waste streams, and the clean-up of environments contaminated by them.

This project has been funded by the Bio-based Industries Joint Undertaking in the framework of the European Union’s H2020 RECOVER research and innovation programme under funding agreement no. 887648. The Joint Undertaking is supported by the European Union’s Horizon 2020 research and innovation programme and the Bio-based Industries Consortium. 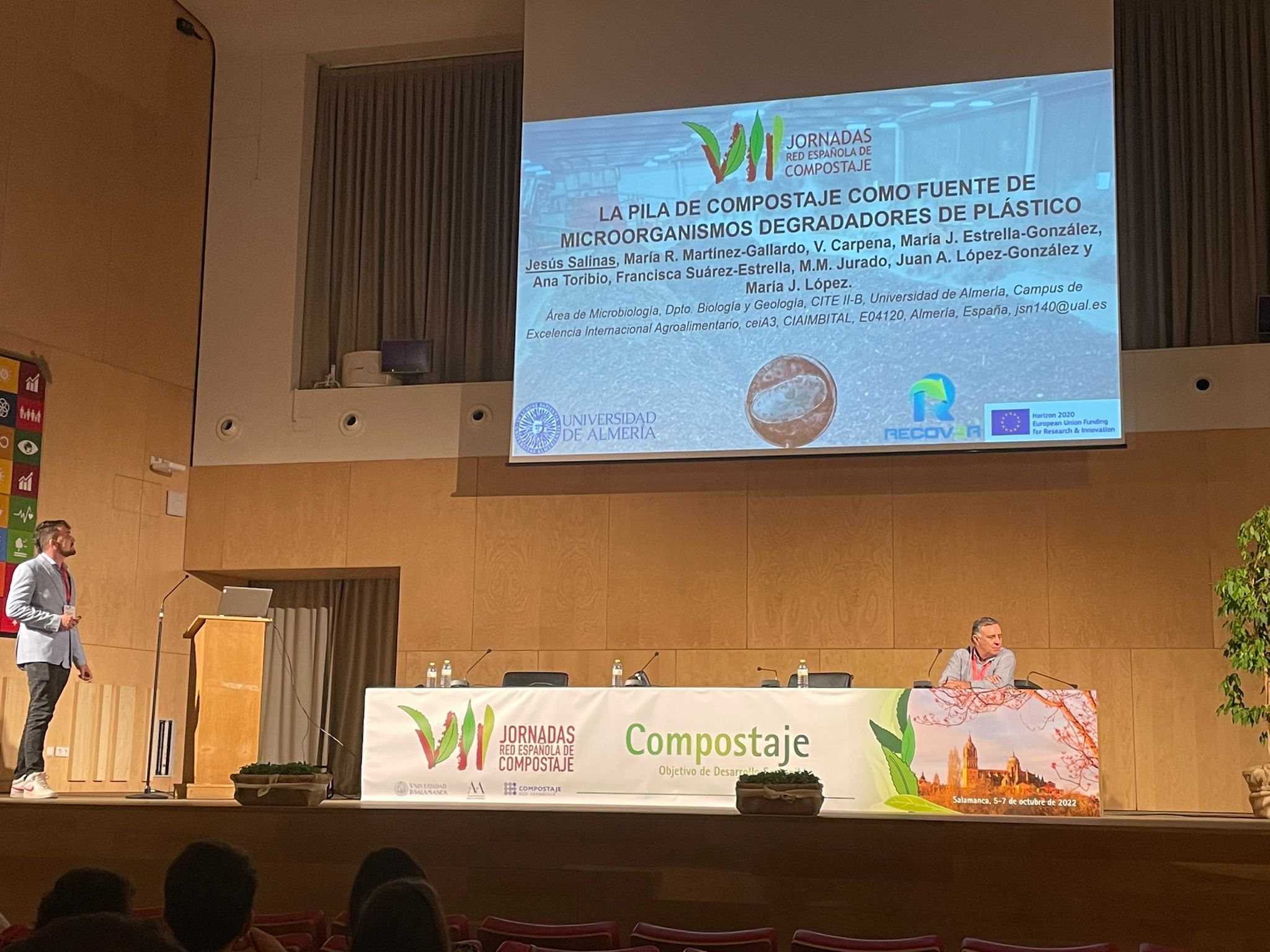 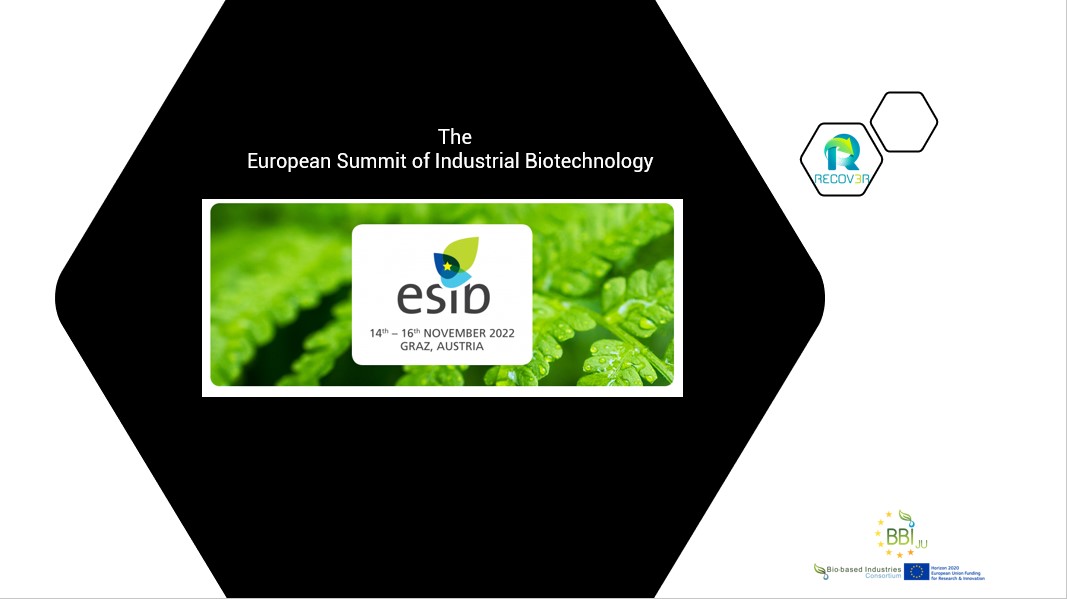 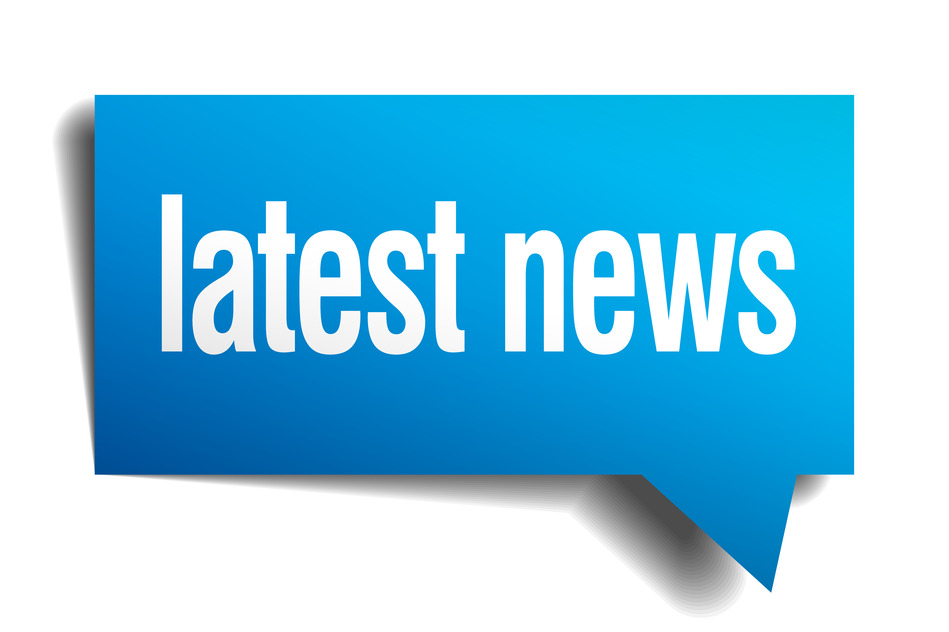 Since the project started in June 2020, the consortium’s activity… 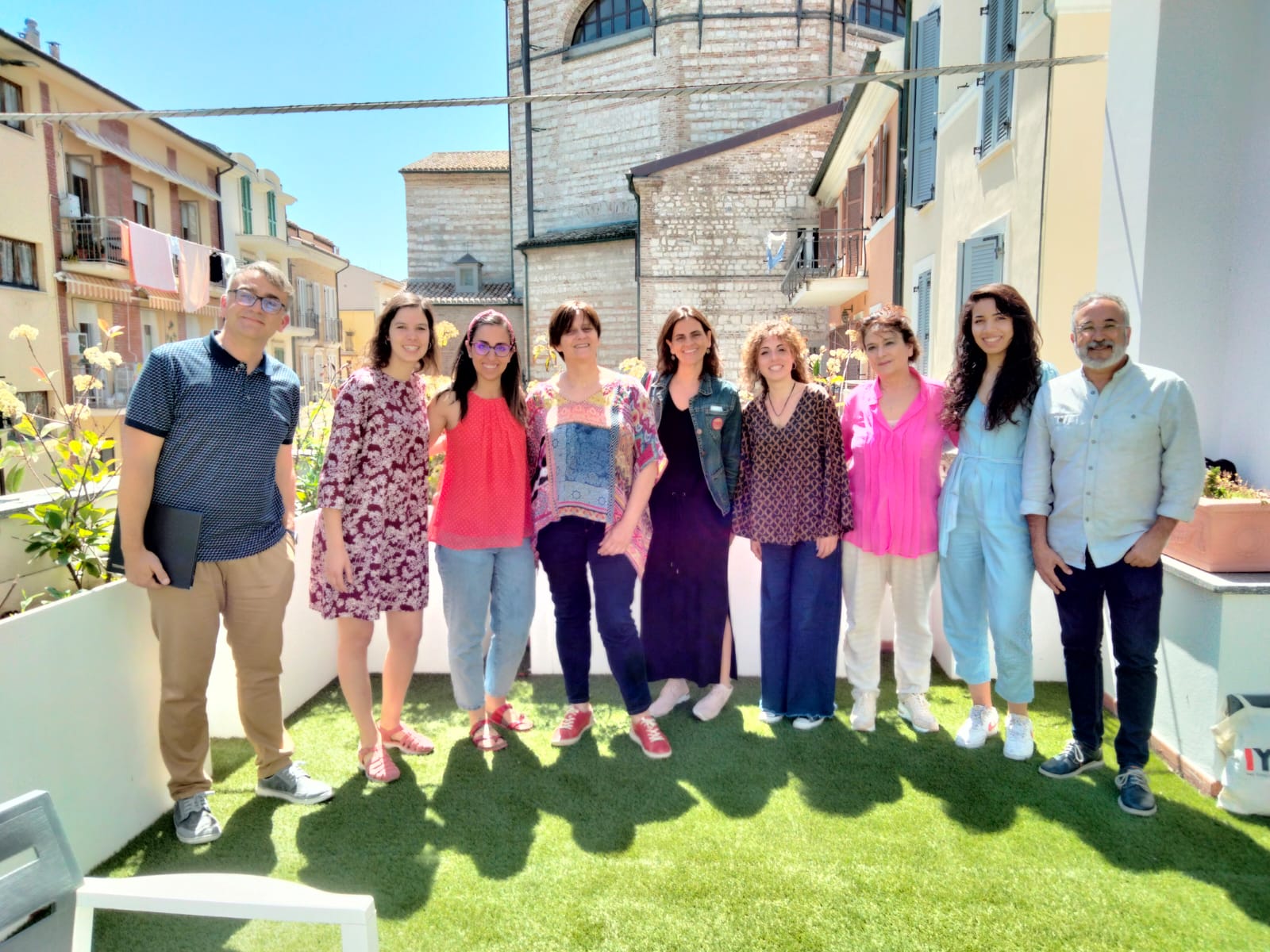 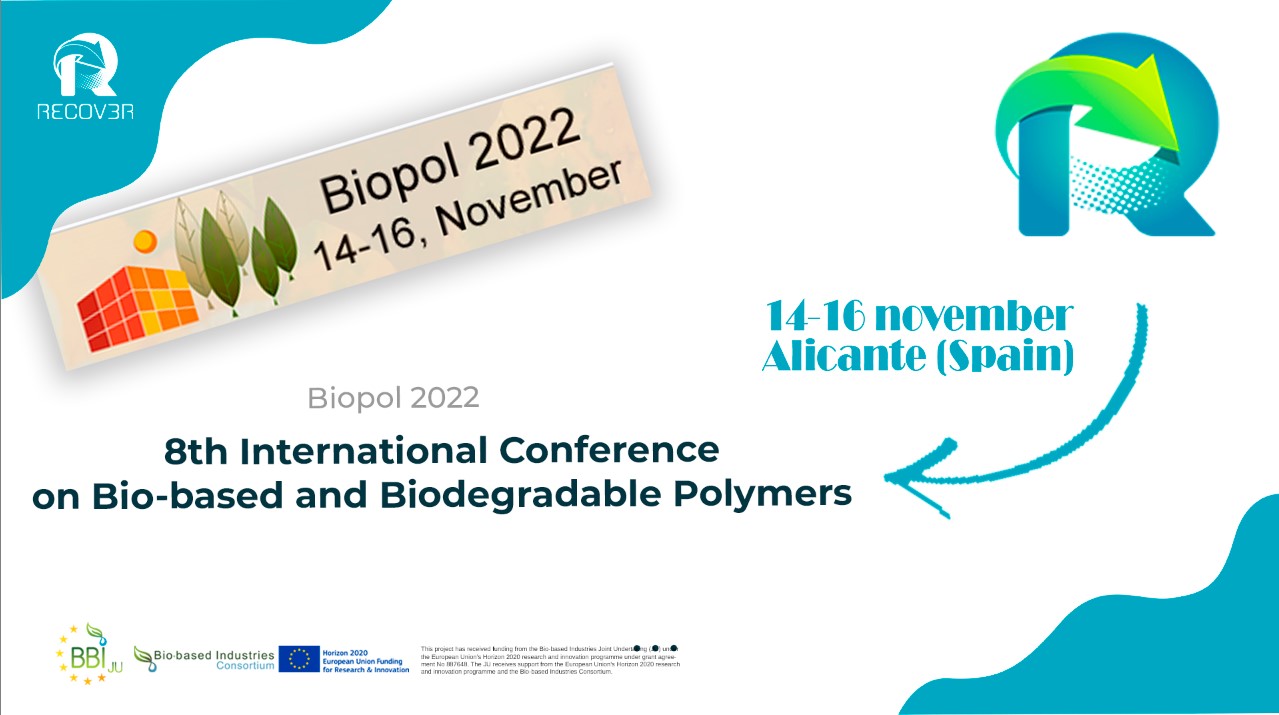 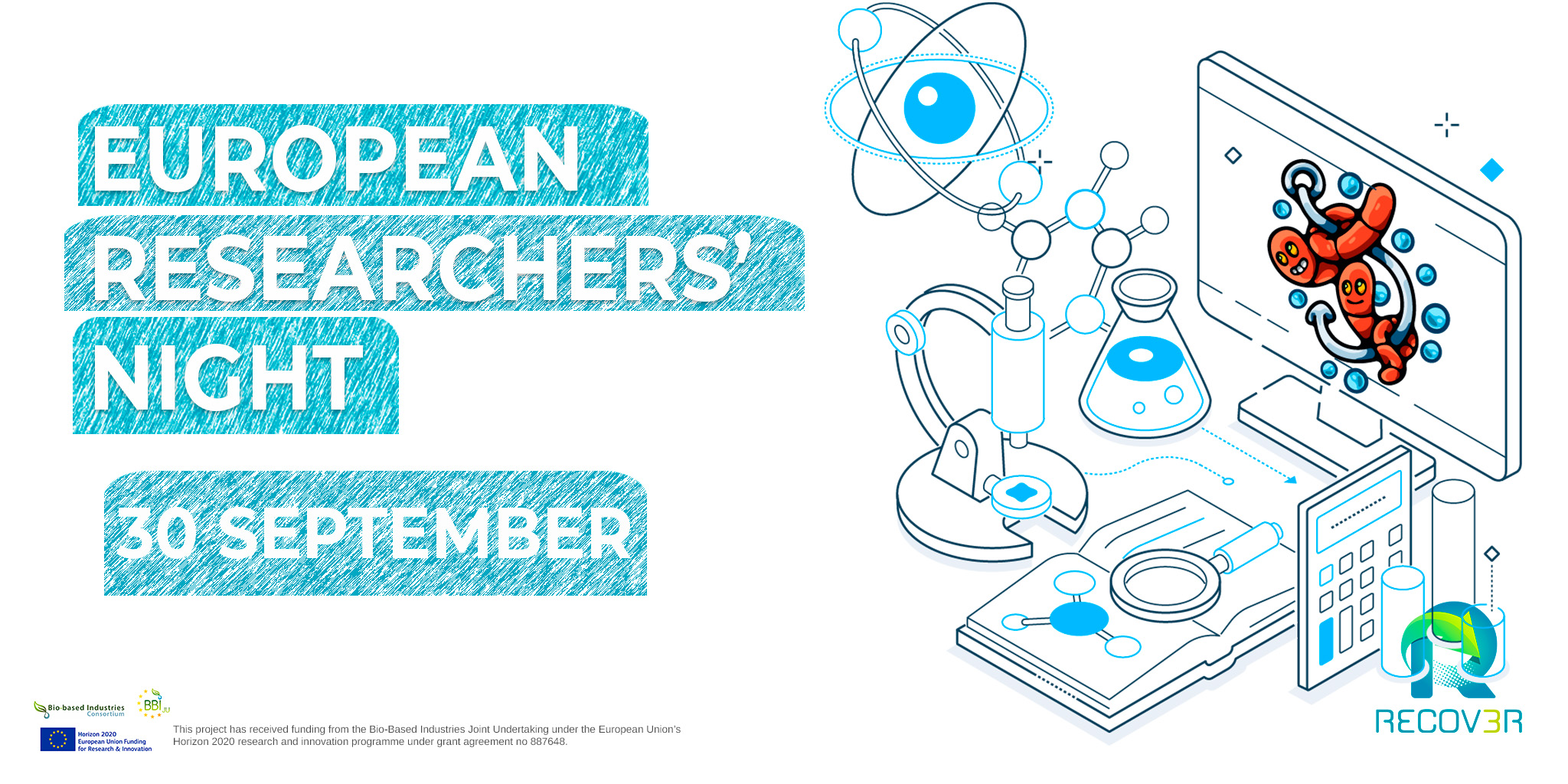 Next Friday 30 September 2022, the European Researchers’ Night, in which…